Everyone has memories of how they learned a lesson in etiquette THE HARD WAY. I’ve undoubtedly spent most of my life looking back on some things and feeling wronged, abused, or frankly traumatized by the ordeal. However, healing and understanding takes effect when you can finally look back and laugh. My grandmother didn’t play, and I thank God for that!

Here’s an excerpt from Broken Glass (a memoir) about the day I looked in someone else’s mailbox. Sure, tampering with someone’s mailbox, removing or destroying their mail without their permission is a federal offense, but finding this out was the worst!

I was four years old in 1979.  Jimmie Carter was the POTUS, McDonald’s unveiled the infamous “Happy Meal,” and television viewers welcomed hit sitcoms like All in the Family, The Dukes of Hazard, The Facts of Life, and Three’s a Crowd into their households. Philadelphia International Records owners, Gamble and Huff released McFadden and Whitehead’s Ain’t No Stoppin’ Us Now that spring, which quickly became an anthem in the black community by mid-summer. Music made me happy. It was then, and still is today, very therapeutic. I’d get lost in the melodies and completely escape to a place where children weren’t slapped or bopped in the foreheads for wanting to explore their respective environments. Like most kids, I was highly inquisitive, and loved to examine things with my hands. Unfortunately, in the Sharpe household it’s what’s referred to a as “plain nosiness.” 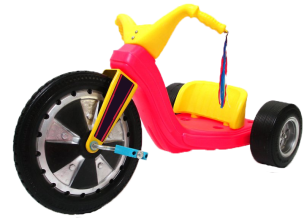 One balmy, North Carolina afternoon, Ma-ma was mowing the lawn with a push-mower while I played marbles on the back porch. At a point, the mower cut off and would not restart. With me in tow, my grandmother headed down the lane to show it to a handyman (Mr. Mule) and ask him about making some repairs on it.  I accompanied her on my “Big Wheel” tricycle. I had outgrown the toddler-toy by now, so I had taken the backrest off of it so that my knees wouldn’t hit the handlebars when I pedaled. While the two stood at the end of Mr. Mule’s driveway and chatted, I finally got a chance to get close to the biggest wonderment in my little world: a real live mailbox!

We had a P.O. box, so my experiences with mail were limited to going inside the post office with a key and sticking my hand in the narrow box. In the neighborhood however, I would see the mail man walk by and put envelopes in everyone’s boxes, and later see the addressees come out and retrieve them.  To be up close and personal with an actual mailbox for the first time was a moment monumental of discovery!  I got off my trike and tipped a little closer to examine the shiny apparatus. It was silver and hot from the sunlight and the center of the door measured up evenly with the height of my face. Perfect, I thought. Without further hesitation, I opened it up, took a peek inside and shut it promptly after discovering that it was empty. My curiosity had been satisfied.

I hopped back on my Big Wheel and waited for the conversation to end.  He agreed to keep the mower, check it out and bring it back up the lane when he was done. I kept quiet during their discussion because after all, it was bad manners to interrupt while grown folks were talking (the irony here is unbelievable, by the way). As they said their goodbyes, I pulled off slightly ahead of my grandmother who seemed to tower over everything she stood near.  By chance, I happened to catch a glimpse of the expression on her face.  She had begun peering at me during the last moments of her conversation and zeroed in when it was time to leave. I had experienced enough in just four years of life to know when I’d better run. That was indeed, one of those times. I would always run first and ask questions much later!

I pedaled for about two cycles and looked back. Of course, she was after me, but I didn’t know why, and I certainly wasn’t about to stick around to find out! The dirt in the gravel path was like quicksand as I struggled to turn those wheels back toward the house.  Ma-ma was moving in a way that reminds me of Ro-Bo Cop!  Her legs were stiff, and her strides were short but quick. She hardly bent her knees when she walked, but she was coming for the kill!  I raced up the hill leading to a cemetery in the center of the neighborhood and coasted back down the side closer to our house, thinking I could gain some ground.  She was still down low on the gravel path walking but looking up at me with her eyes piercing through me like laser beams.

“I’m gone crack a whip across your back…  grown self…” she mumbled to herself as I sped down the hill to get back onto the path.

I couldn’t shake her.  I’d think I was getting ahead and with one slip-up she was right back on my tail like Jason Voorhees! I finally reached our driveway and turned in.  My wheels dug deeply into the sand and would not turn.  I looked back over the neighbor’s’ hedges and could only see her upper torso shifting from side to side as she waddled closer. Because I could not maneuver in the sand, she was suddenly within striking distance.  I leaped off my now useless kid vehicle and began to drag it behind me. I galloped toward the rear of the house. I don’t know why I didn’t just leave it there and run for my life. I suppose that would have been bad manners too eh?

Inside, I hoped that if I could just make it to the back porch to put it away, maybe she would be satisfied.  Besides, what in the world was I in trouble for in the first place? I had pulled away from her. She was winded and slowing down some. I flung the screen door open and hoisted the trike onto the concrete slab.  I figured it would be minutes before she could get to me.  Just as I concluded those thoughts, and shoved it into it’s designated space in the corner of the porch, there she was.  Life went into virtual slow motion. The hinges of the screened door seemed to creaked just like the door in the opening of Michael Jackson’s Thriller. She took one step onto the porch and I took fifty, trying to get inside and take cover.  I ran straight for the bedroom that Mom and I shared, and scurried underneath my bed. I scooted all the way up against the wall.  Mom was on her bed napping, but was awakened by the sound of my grandmother’s light voice attempting to sound loud.

“Jooooooaaaaaaaaaannnnn!  Where are you? Come in here right now!”

I tried to slow my breathing as I pressed my little body firmly against the cold, dusty baseboard.  I heard her rattling her whip collection that she kept just for me along the backrest of the couch in the den. To make matters worse, those whips all came from the Willow tree out back. In case you didn’t know, they’re long and green. You know, the kind that wrap around your arms and legs when you get hit? Yeah. She was frantically searching for the perfect one for this beating.  She stomped into the bedroom and yelled to my mother, “Where is she!  She’s grown and mannish!”

“Well, momma what did she do,” Mom questioned as she tried to gather herself and sit up on the bed.  I was as quiet as a mouse, but listening close because I wanted to know the very same thing!

“I’m down there talking to Mr. Mule and she fasts and goes in the man’s mailbox!”

Great! I thought. This is how I get the memo on what I’ve done wrong? We had not gotten to that chapter yet in the book of right and wrong.

She searched the whole house.  Mom began to call me too.  I didn’t move a muscle.  I was determined to stay under there until the following week if I needed to.  After a few minutes of searching for me, I could see Mom’s socked feet come back into the room and rest by her bed.

“Did she come in the house,” Mom asked.

“Look now. I’ve got to go to work tonight. Y’all are disrupting my sleep, carrying on,” she said with a yawn.

I wanted to call out to her but I didn’t.  I rolled onto my stomach to give my left shoulder a rest.  After a few seconds, I decided to try to slide out to let my mom know I was there.  I didn’t want her to worry about me anymore. Just as I got close enough to possibly get her attention, Ma-ma’s reddened and sweaty Native American face suddenly obstructed my view.

“Ahh ha!  Get out from under that bed gal!”  Her eyes budged as she yelled at the top of her lungs.  She was down on her hands and knees, shaking a  tree limb at me underneath the small twin bed.  The blood vessels in her forehead pulsated and her face was flushed. I scurried up against the wall again.

She raked the switch back and forth across the floor trying to make contact.  Not only was I in trouble for looking in Mr. Mule’s mailbox, but now I had eluded her AND sassed her!

She got up off the floor with a grunt and remained silent for a brief moment. Time literally stood still. Then suddenly, without any warning, the bed that had sheltered me slid away from me across the floor. I could see the ceiling.

“Joan, come on out of there,” Mom reasoned with a tired voice.

I stood up so that my head and chest were visible to them against the wall in an attempt to surrender.  Ma-ma grabbed me by the arm and yanked me up onto the bed.  She slammed me onto the mattress and pinned me down. I waited for mom to do something.  My grandmother was so angry; she probably would have turned around and whipped Mom too if she tried to intervene.  I wanted to fight her back, but I was too small.  I wanted to stand up, grab that switch and break it right in her face, but I was powerless.

I hope you enjoyed that excerpt. It’s one of many adventures from my unfinished memoir, Broken Glass. It is difficult to write about personal experiences and share them with the world. However, a little feedback, your take aways, and your thoughts could go a long way towards helping me finish it! Please, leave a comment and give your much appreciated feedback!

Come again, and remember: Never try to pedal a Big Wheel in loose sand, and WHATEVER you do, DO NOT EVER open someone else’s mailbox.

2 thoughts on “The Mailbox”