The thought recently occurred to me that in order to prepare our students for the future, school districts have to implement social media technology into the curriculum.  Recently, one of my eleventh grade anatomy students (we’ll call him Andy) raised his hand to be acknowledged and said frankly,

“Mrs. McCullough, you do know that today’s student’s are smarter than you all are, don’t you?”

In an attempt to fight back the adrenaline rush and avoid the onset of steam spewing from my ears, I replied,

“How on earth did you come to THAT conclusion, Andy?”

His answer was simple, but painfully obvious.  “Teachers are not ‘up’ on technology like we are.  If you all hook up a new device, you have to read the directions.  Y’all don’t even really know how to use Twitter or Instagram. The stuff we’re learning in school is really not preparing us for real life.”

A Biology Pre-Med major on paper, but a technology enthusiast at heart, I heard him loud and clear.  As the other students began to chime in, I realized that scores of children across the nation probably agree, especially in rural America.  I thought back to an earlier point in the semester when I tried “Tech Thursdays.”  I had done extensive research on QR codes (abbreviated from Quick Response codes) and the ways they could be implemented in the classroom.  I used JumpScan to create all sorts of codes and posted them all around the room.  Some led to websites dedicated to the history of the scientist’s whose famous quotes appear on the walls.  One code is taped to a poster of Barack Obama that if scanned, will take the students to the official White House web page.  There is even a code for my beloved Redskins on the wall, near my desk.  I was excited!  I was ecstatic!  I had hit the technological jackpot! Yet, in an instant, I was tremendously let down when after a few scans, they couldn’t care less.  The novelty had worn off before I could begin think about creating codes for assignments and review questions.

So, I launched a massive Twitter campaign.  I tweeted biology review questions and facts using a hashtag.  I posted links to review sites, and YouTube videos.  I organized an in-class tweet chat and allowed students to use their devices to tweet any questions for me during an instructional video rather than the tried and true writing-on-paper tactic.  It sparked some interest, but most students still didn’t “get” what I was trying to accomplish.  In fact, I began to believe that they largely viewed my technology fetish as an anomaly among most teachers. 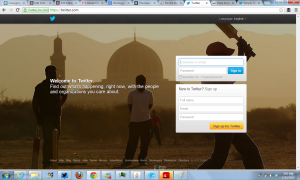 I began to poll my colleagues to see if  I was the only one actually using social media to reach students.  My findings were astounding.  Absolutely no one I asked was even thinking about utilizing social media beyond their own personal Facebook profiles.  Some did admit to using Edmodo, but did not elaborate on the site’s effectiveness in generating engagement with students.  In fact, the common response I got about other platforms was, “I just don’t get Twitter” or “I’m on Facebook, but that’s about it.”  I personally find Facebook to be full of random photos and rantings from folks perched high atop their soap boxes.  I want information.  I want engagement that helps me grow my dendrites!  Doesn’t everybody!?  Apparently, not.  It seems that currently, my efforts to bring my peers along in an evolving world of social media are falling flat.

Even more alarming, I discovered that most of my students do not actually know how to tweet; that is, according to the “experts.”  Posts about what they are eating for lunch, how tired they are, the state of their relationships with significant others, and their disdain for school is about as rich as it gets.   Of course, adding a relevant hashtag is out of the question! I feel like I am teaching from behind.  With students’ preconceived notions that we are beneath them on the technological totem pole, I feel compelled to flash my credentials defending my audacity to even attempt to teach them social media etiquette.   School districts must explore ways to implement social media across curriculum.  It would be a great way to ensure that students are writing to learn.  Teachers will need professional development for effectiveness. Sure, people frown upon social media because of its potential for off task behaviors and the threat of bullying.  However, if this is going to work, a strategic plan must be put into place in order to make all stakeholders aware of the benefits of teaching responsibility and ways to prevent misuse.  An informative article and thorough plan can be found in the link below.

Do We Need Social Media Education in Schools Now? | Social …

Is it time for social media education in our schools? The recent Manti Te’o hoax is only the tip of the iceberg. He knew how to use social media, but didn’t understand its power.

I suppose, I’ll have to declare Andy victorious in pinning me to the technology mat for now.  Make no mistake, however!  I am a proud Generation Xer circa 1975 who witnessed the inventions of the video game console and its evolution, the cassette tape, the Walkman, the remote control television, the personal computer, compact discs,  and yes…the VCR (did anyone EVER figure out how to set the time on those things?)!  Admittedly, I thought the same things about our teachers growing up.  Now, I desperately want to change that culture.  I do not want to get lost in the technology race to the future.  I want to stay ahead, so I’ll keep reading and researching.  From here on out, I plan to teach students how to utilize social media in a positive and lucrative manner while learning science.  How do I plan to go about it?  First, I have to remember to hear my students when they speak, and then do my best to meet them half way.  Thanks, Andy.

6 thoughts on “Are Schools Losing the Social Media Race?”