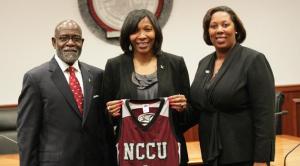 Vanessa Taylor came on board at North Carolina Central University in 2012, and has already steered the women’s basketball team in the right direction. She inherited a squad that had gone 3-27 prior to her arrival, and finished with a menial 2-27 record last season. Within those two campaigns, The Lady Eagles suffered 29 straight losses – Ouch!

This season, they’re 5-4 going into the holiday break, and I knew they would be. This isn’t about statistics and records. It’s not about glory, or fame. This is about life. I know women’s basketball and I know Vanessa Taylor. That’s what she does. She resurrects defunct programs, dusts them off, and makes them viable contenders overnight. In the process, she impacts player’s lives eternally. How do I know?

I visited the Lady Eagles in Durham on Thursday to watch them square off against Western Carolina. They came out  a bit sluggish, but thanks to outstanding play from Jessica Freeman and Racquel Davis, Coach Taylor and her staff stayed the course and led the team to overcome a 10-point deficit and win 73-69.

Terrance Jones, the Marking Director of Athletics had contacted me and invited me up to surprise Coach Taylor and say a few words to the team. I arrived at McLendon-McDougal Stadium just after morning shoot-around. I felt like I was home after a twelve-year journey through the Amazon when she emerged from the locker room. We hugged in jubilation and chatted for a few moments before it was time for the coaches to get dressed for the game. The funny thing was, that as Coach introduced me to the staff and team as “one of my Elizabeth City babies,” They all said, “Oh, my goodness! Girl, tell me how you survived!”

We talked about how she has changed over the years. She saw a parallel in what Jameis Winston, this year’s Heisman Trophy winner said in his speech and how she asks her own players to “trust the process.” We reminisced about our time together at ECSU, and she apologized emphatically saying, “I am so not that person anymore!”

I Googled “ECSU”and “Vanessa Taylor.” I searched for accounts of her first years there, and I came up virtually empty. Every success story has a beginning. Sometimes we want to skip to the good part – the end – the outcome. She didn’t recently come up with a plan for success. Coach Taylor came out of the starting blocks with a vision. Here’s the Story.

I met Vanessa Taylor in 1994 at Hampton University. A graduate assistant coach at HU under the direction of Tiny Laster, she sat at the end of the bench, sporting a black pants suit, heels, and a clipboard. Meanwhile, I was a rebellious freshman on the Elizabeth City State University Women’s Basketball team. I had been benched for the entire first half, and came out in the second, raining threes – I was SO not a three-point shooter. However, at that time, I was unpolished and cantankerous, to say the least.

Hampton totally annihilated us on their turf. The 5’11” First-Team All CIAA point guard, Thelka Blue did everything she wanted to do to us. Seriously. Tiny came down the line afterwards and patted me on the shoulder and said with a smile, “Good game, young lady,” but there was something about the way Vanessa Taylor shook my hand seconds later, and the way she carried herself that made me think I want to be like that one day.

After a dismal 4-23 season in “Viking Land,” our coach was dismissed. We anxiously awaited her replacement the following fall. I got wind that whomever the university had chosen, would be at the Vaughan Center on the first Monday in October. I made it my business to get there after class.

I entered the doors and headed into the athletic offices. There she stood. The 25 year-old had landed her first head coaching job, and she meant business. I introduced myself, and there it was, again – the handshake…of DEATH!

Coach Taylor all but killed us over the course of three years. She wasn’t blessed with an elaborate coaching staff. Her budget was paltry. She inherited a team with just two scholarship allotments. We each had a $5 limit on post game meals while the men’s team had $10. She fought tirelessly for gender equity across the board.

She pleaded her case for new uniforms to replace the ten-year old attire we played in with no drawstrings! Yes, I lost my shorts at home versus Norfolk State while attempting to set a trap on Lisa Rice. It was nearly impossible to stop the NCAA Division II all-time assist leader, and for coach, showing our undies to a sell-out crowd, was the last straw!

To add to that, there was no strength and conditioning coach to ease the load. Her one assistant was a local high school teacher who had a strong background in athletics. There was one athletic trainer, and if the men had a game when we did, but at a different location, we wrapped our own ankles. We went without. Therefore, she had to do it all on her own and she was very imaginative when it came to conditioning us, to say the least.

Every morning, from the day we unpacked our dorm rooms for the year until the official start of the season, we were up at 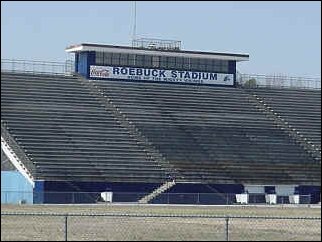 4:30 am. We ran the steps of Roebuck Stadium sometimes, in the rain. We ran to the Food Lion grocery store and back, with Coach following us in her burgundy Escort. We WERE the cross-country team, for all intents and purposes.

When the gym floor was occupied for homecoming and the weather was too bad, we ran laps inside the hallways of the gymnasium. When we could no longer run because our muscle fibers were torn to shreds, we did fingertip push-ups, diamond push-ups, six inches, and we sat on the wall.

Soon, we began to make up modern-day negro spirituals just to make it through the grueling practices. Still, we trusted the process.

Thankfully, after a season that boasted nine wins, Coach Taylor retained a few of us, when she let several others go. I was a 5’9″ walk-on point guard, there on an academic scholarship. Graciously, she granted me athletic monies also because after all, shouldn’t the starting point guard be a scholarship player? Again, that’s what she does.

Conversely, by the end of my junior year, Vanessa Taylor was too through with Joan Vanessa Sharpe. During my post season conference, she let me have it!

“Miss Sharpe, I was not pleased at all with your play this year. When you didn’t get your way, you pouted. You saw more time on the bench this year and you didn’t respond in a positive manner. You played absolutely NO defense  the entire season..I mean ANYBODY could get by you, and you’re about twenty pounds over your playing weight. Therefore, I’m pulling your grant-in aid for the fall semester. It’s up to you to gain it back for the spring.”

I made it back to my room, and I cried. I sucked it up though, because she was right. On my way off campus, heading home for the summer, I stopped by her office to make a declaration.

“Coach, have a good summer,” I said, standing in the doorway as she sat behind her desk watching recruiting film.

“You too, Joan,” she replied, only glancing away from the screen for a split second.

“I’m going to be your best defensive player, next year,” I uttered, practically betting the farm on it!

She looked my way then! “Okay,” she said flatly with a yeah right look on her face.

I went home, and I went to work. In August, I came back slim, trim, and determined to earn my spot and my money back. I went from coming in third to last in the 100’s, to finishing first. I went from a nine minute mile to seven and some change.

Admittedly, I didn’t subscribe to Coach’s tough love. My senior year, after running ten suicides for every minute late to the track one day – timed and totalling THIRTY, I contemplated quitting basketball for good. I couldn’t handle another season like the one prior (this is where I’ve introduced conflict).

However, something supernatural kicked in that resonated in my head again during my recent visit with Coach Taylor. It was the moment she said to me that her players had to “trust the process.” It was almost as if 17 years ago, a voice had spoken to me, “Trust the process. Stop resisting change. Trust the process.”

In 1996-1997, I did. I listened, and I trusted Vanessa Taylor with my life. We went on the win more games than The Lady Vikings had won in five years, and I went on to lead the ..no, the CIAA in steals that year, and Coach Taylor then went on to lead the Lady Vikings to two Eastern Division titles a few years later. She became the winningest coach in Johnson C. Smith’s women’s basketball history while snagging a CIAA championship along the way in 2009. Now she is at the helm at NCCU, doing work (conflict-resolution)!

With so much adoration and appreciation I must say, no apology necessary, Coach! We are all strong, successful women, largely because of you. At least, I am. As for the Lady Eagles, consider yourselves fortunate to be on the Vanessa Taylor “bus.” Now, be sure that you’re all facing forward, because it does make drop-offs for passengers who get unruly, but I promise you that while being a part of the turnaround happening at North Carolina Central University, you’re in for the ride of your lives! Through it all, embrace change, and “trust the process.”